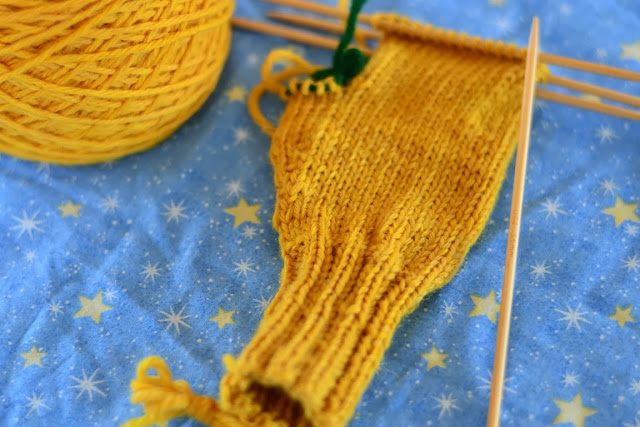 I'm back!  Joining Ginny's Yarn Along over at Small Things for the first time in eons.  Months ago I began putting my limited time into writing rather than knitting, and my knitting bag in the van was replaced by my notebook, and in the evening I generally had the word processor on my laptop open.  So I've not been doing much knitting.

The mittens above are being knit in Lion Brand Fisherman's Wool which I dyed with onion skins
(my first experiment in dying with natural dyes).  A pretty color, but no one likes bright mustard yellow and the wool is on the tough-and-scratchy side, so I think mittens or slippers may be my only options for it.  So I'll do a set of mittens to start...

The only other knitting I've done has been a black watchman's cap for Bret and a Mike Nesmith of the Monkees hat for Sebastian (there's a photo of him wearing it here).  Adrian wants a hat in the same style--with a pom-pom--for his birthday in 3 weeks, and Una wants some elbow-length fingerless mitts, so I guess I'll have get back into it.

As for reading, I just opened and account on Goodreads.com, and have a list of books I want to read.  Currently I'm reading some online articles on writing and have just begun reading O'Henry's works, but I'm finding it tough to find time to read, write and knit...so we'll see what gets dropped!