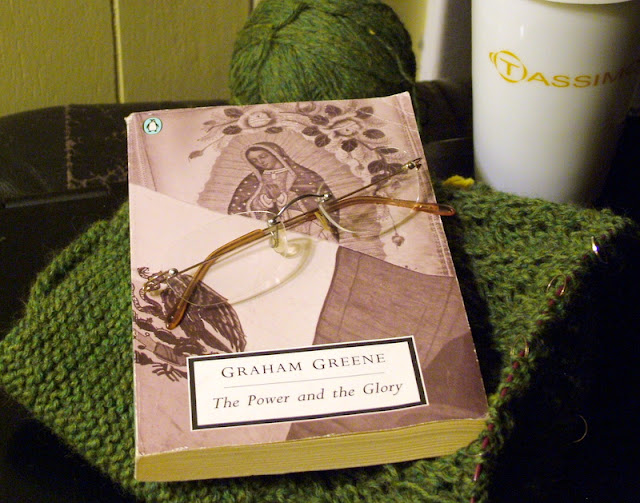 I'm back with Ginny's Yarn Along after a long hiatus.  It is not that I haven't been knitting or reading; only that I had nothing much to show.  Finally, I am into my second attempt at a February Lady Sweater, after having frogged the first due to sloppy button holes and a nasty error on the back.  I say this is my second attempt, but to be truthful I have actually lost track of how many times I began this sweater.  On the first one, I think I may have begun at least 3 times. I really stink at ripping back, and usually get frustrated and start from the cast on. On this one, I think I started from the cast on twice.  But it is possible that there were more start-ups than that.  I just seem to recall rewinding my yarn many, many times.

I am pleased to report that it is going better this time, and I think that I have, after umpteen attempts, finally nailed the one row button hole.  I'm enjoying myself with it, but may have to put it aside to squeeze in a dolly cardigan and hat for Gemma's doll, as her birthday is next month.

As for my reading, in the past few weeks I read Michael O'Brien's Plague Journal, and I found it pretty frightening, playing as it does in a future that is so near it is practically the present.  I don't want to spoil it for anyone who may want to read it, so I will say only that I recommend it.  Of course, now I am forced to read the next one, Eclipse of the Sun, but I have decided to read Graham Greene's The Power and the Glory first.  Hopefully I'll start in on it tonight.

So...are you knitting for a birthday?  Or are you so darned organized that you're already working on Christmas gifts (now's the time to start, you know!)