I keep waiting for things to slow down a bit, but I can't foresee that happening any time soon.  Last week I was scrambling to get things done before leaving town for the Mother-Daughter retreat with the Sister Servants of the Eternal Word down in Alabama, which Una and I have attended for 4 years in a row now, thanks to the generosity of a good friend who has made it a birthday/Christmas gift for me.  We had appointments for check-ups for Sebastian and Dominic on Thursday (I have scheduled all the kids for physicals this summer, since most of my kids haven't even seen a doctor in two years), and then we went grocery shopping, as I would be gone on the weekend.

At home, I cut Gemma's hair.  It was hard for me to do it--Una's hair wasn't so much as trimmed until she was 8 or 9, I think--but Gemma's hair was so fine, and tangled so easily, and since I would be leaving her with Bret and the boys (none of whom can make a decent ponytail, let alone braid hair), I decided it would be a good time to do it.  Gemma was excited, and really wanted the cut, which made it easier for me, of course.  All in all, it will be better for summer, for trips to the creek and hot, sweaty days in July and August.

The trip to Alabama was great.  It is a 5-6 hour drive, depending on how many and how long our stops are. But I bring my knitting and my friend does the driving, and the whole trip seems very quick indeed.  We made good time in spite of detours and stops.

The retreat itself was wonderful.  Fr. Ben Cameron, CPM, gave four conferences on Defending the Faith, and they were very good.  It was nice to meet new people and see old familiar faces again.  And it is always a joy to see the Sisters...they absolutely beam with life and joy, and it is impossible not to be affected by their vivacity.

I missed Gabriel's first time serving at Mass, but Sebastian managed to get a little bit of video of Gabe processing in and out from Mass.  He tells me he was very nervous, and that he had a few tense moments, but he is also looking forward to his next time serving.

We got back home somewhere around 9 o'clock on Sunday night.

Yesterday was spent unpacking, doing laundry, answering email, and making To Do lists.  This week I am cleaning up around here, as my grandmother and uncle will be visiting for a few days next week.  I am not a great housekeeper--really, I used to be fantastic before kids!--and I have little confidence in my cooking skills, so company always makes me nervous.  And although trying to clean the house with 6 kids constantly running about it sort of akin to trying to simultaneously brush your teeth and eat Oreos, I am doing my best.

I have bills to pay this week, and a mountain of laundry to fold.  I have to report grades to our umbrella school (deadline is coming up) and get the kids to vacuum today.  I have butter to make, and I need to get some mulch onto my herb bed, as the weeds are outgrowing the herbs at this point.  And I need to decide what I am making for Gemma's birthday next month.  Her baby dolls need some clothing again, and she could use a nightgown.

The day looks nice at this point, although the ground is still soaked from yesterday afternoon's brief but torrential downpour.  Una hasn't quite recovered from the weekend of late nights and early mornings and is still abed.  I'd better dress and get breakfast on the table.  Baked oatmeal this morning.

I'm glad to be home.  I missed the kids, and this little firecracker especially: 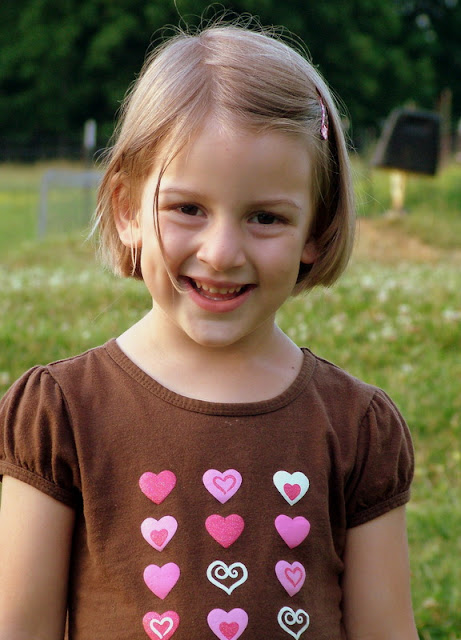