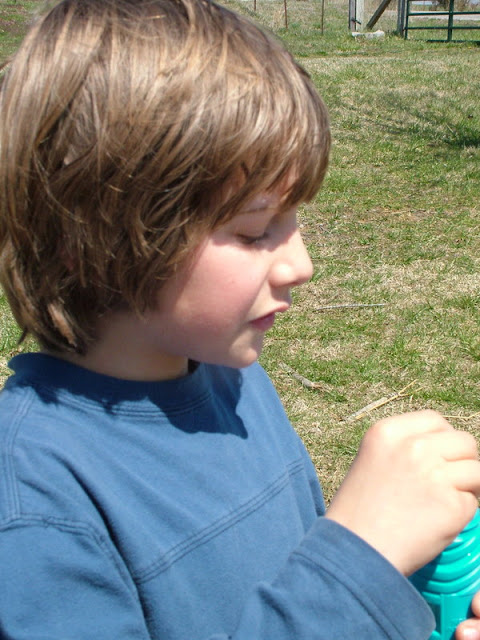 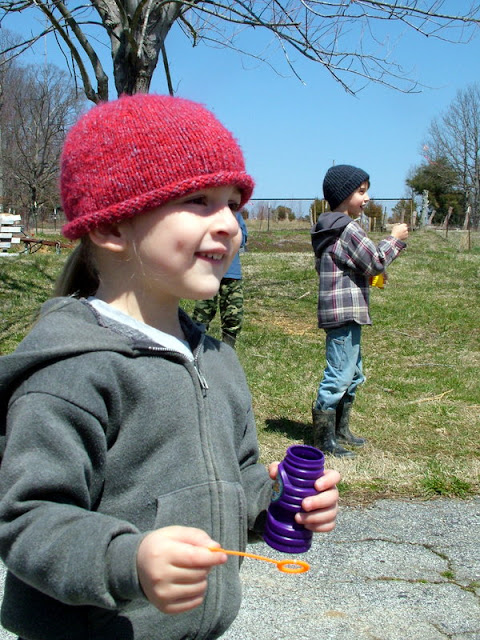 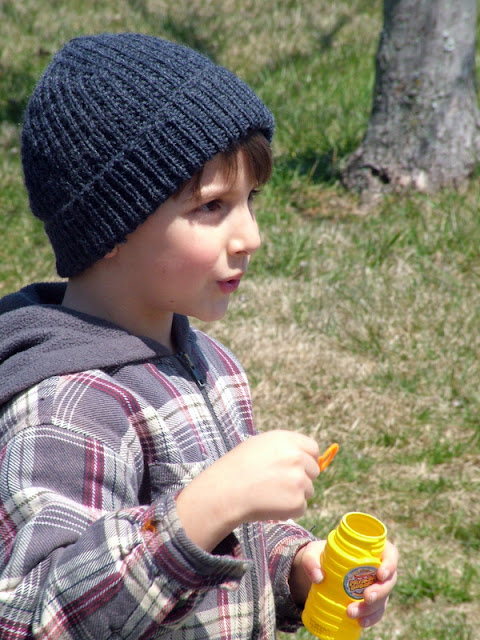 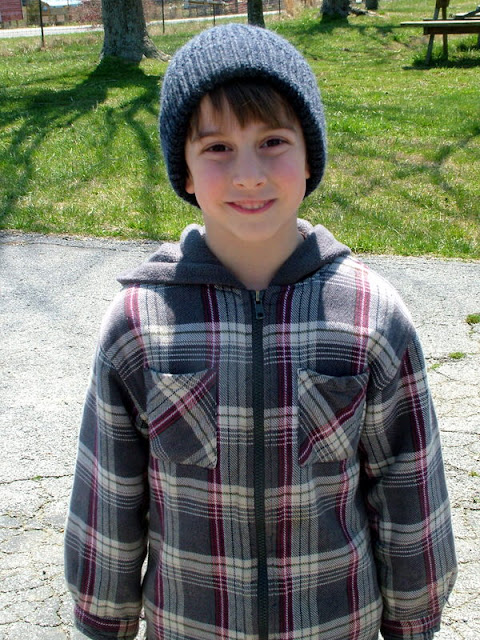 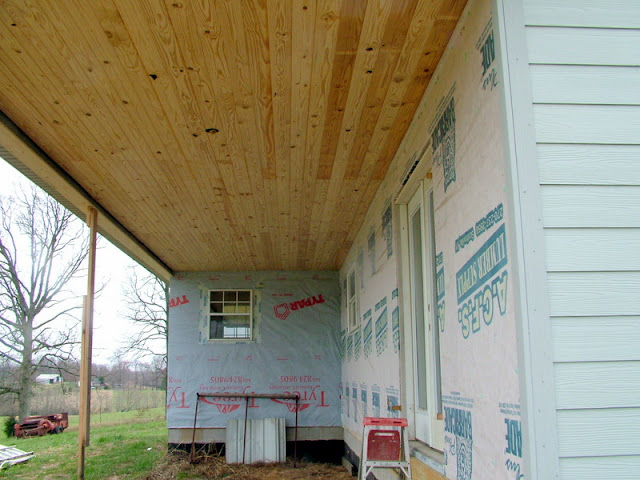 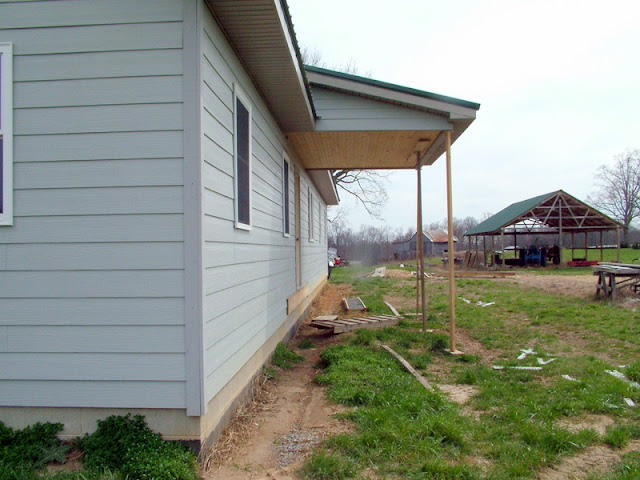 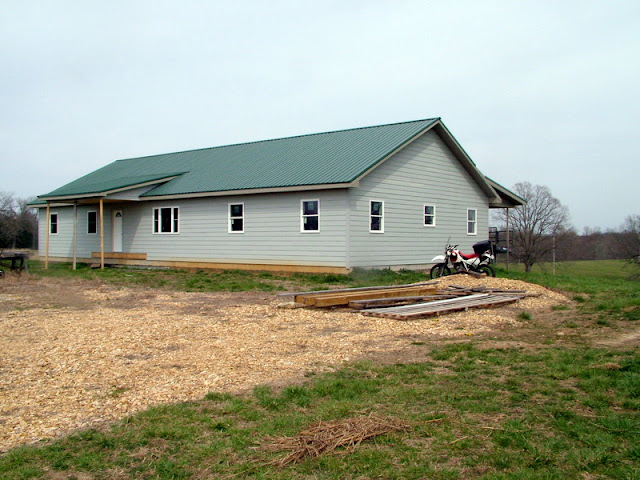 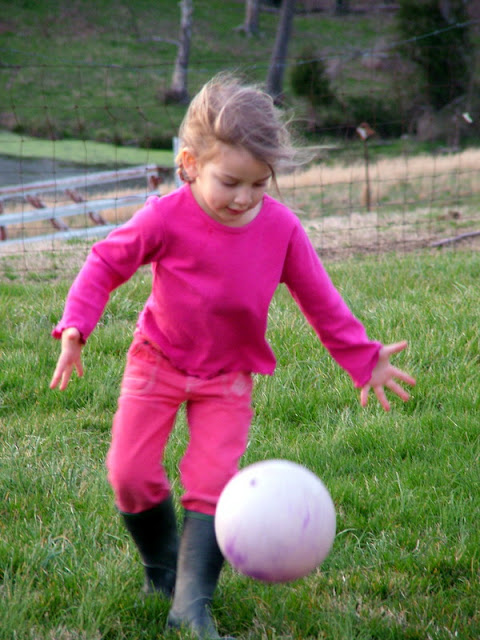 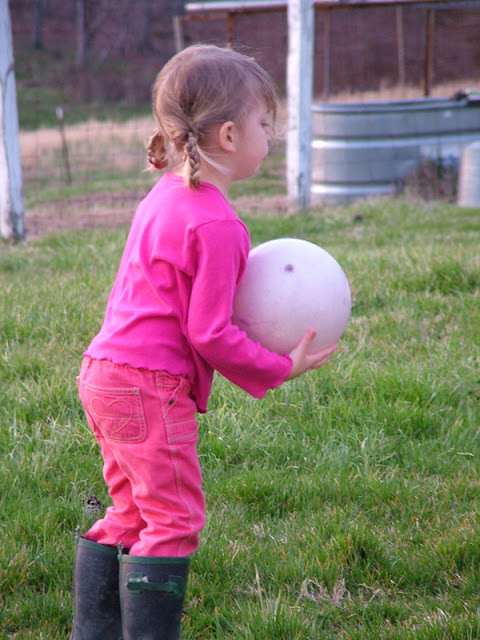 I've been on a blog break for the last week, as you may or may not have noticed.  Honestly, I just haven't felt up to blogging lately.  I had thought I would get back into it after Easter, but last week was really busy.  Bret, who has had few hours at the cabinet shop, was working on the house on Monday, and on Tuesday came home from the cabinet shop somewhat early and sick as a dog with a terrible cold.  Wednesday I had to go into town to have the dentist fix a temporary crown that had been causing me a lot of pain all the previous week, and then Dominic, over a cold, seemed to have an ear infection.  The other kids complained on and off of sore throats, and I fought it all with lots of vitamin C and colloidal silver (and garlic-mullein oil ear drops for Dominic).  On Thursday we had our food co-op pick-up, and I left everyone home and went with Bret.  On Friday, Bret, against my better judgement, went to work on the house again.  The weather was nice, but he still was coughing and congested.  Well, when he came home, he was as poorly off as he'd been on Tuesday.  Saturday was spent at home, administering tea and vitamin C to all who needed it.  I cancelled plans to have my sister's family and my mom over for Divine Mercy Sunday.

We did make it to Mass yesterday, and God's mercy was abundant.  Bret is much better today and is working at the shop; Dominic hasn't had to take Ibuprofen in 36 hours; Gabe and Adrian, who both had sore throats last night seem well this morning (although I will carry on with the extra C and supplements throughout today), and the weather is dry and mild.

Some plans for this week:  I'm off to a busy start.  I have a bunch of school print-outs to, er, print out for this   week and next; I have done laundry this morning, made a phone call to Shoebuy.com about a refund, filled out a form to return a still-under-warranty-non-functional MP3 player, put up a batch of water kefir and paid the electric bill.  I still need to do my bank statement (yuck), fold a heap of laundry, and get some herb seeds started now that winter seems to finally be over.  I am also hoping to bake an apple cake or two...

I need to order and make birthday gifts for Una, whose birthday is only a couple of weeks away and I need to make a list of other things to make for upcoming birthdays (doll clothes for Gemma's birthday in July ought to be started on soon, or I'll never get them done!).  And there's Mother's Day to think about.  Eeek...

If I find some time to myself, I would like to...cast on a sweater.  And maybe some doll things.  And another pair of socks.  I would like to dig around in my fabric stash and see if there is something I could use for summer pajama shorts for the boys, as they really don't have much that isn't ready for the rag-pile at this point.

I am grateful for...Dominic's ear improving without a trip to the doctor, as we've done the whole ear tubes thing before and I wouldn't want another summer of constant vigilance over Dominic around water.  I'm grateful for every day that Bret has work, and it looks like he might be busy this week; I am grateful for the work he has gotten done on the new house recently.  I am grateful for a full pantry and family and friends.

Some prayer intentions for this week:  I have been praying for the grandma of my daughter's dear pen-pal, who at last word was very ill with pneumonia and unresponsive; I am praying for the daughter of a friend who is awaiting word of whether she will be be able to attend the college she has her heart set on; I am praying for the completion of the new house and for enough work for Bret to pay the bills, and for friends of ours who are trying to sell their farm and other friends who are looking for work, and for Laurence to quit smoking (Ahem! You hear me, Laurence?).  Finally, I pray for greater zeal, so that carrying the cross will be an act of love rather than something to fear.

Something that makes me smile:
Dominic, to Una , regarding a character she has in one of her stories:  "Why is the main character working for the bad guys?"
Una:  "He has amnesia."
Dominic:  "Well, maybe he can sneeze on the bad guys and they'll get it, too."

Have a blessed week!
Posted by Nadja