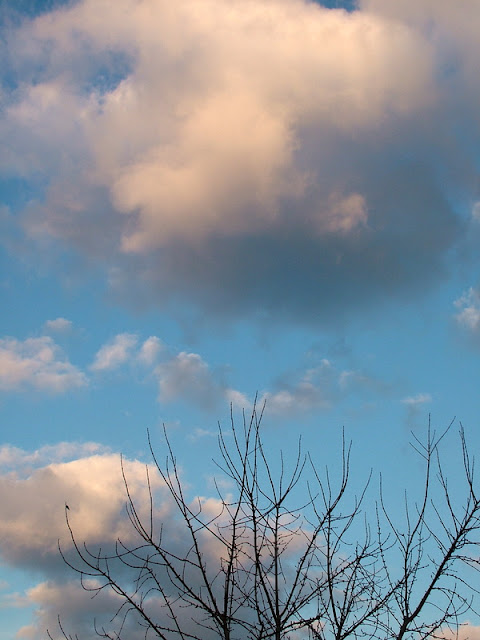 So, I begin the first week of the new year by hitting the "publish" button right after putting in the title.  Whoops.

I won't be following my usual format today.  I just need to shake things up a bit this week and break from routine--as if I haven't been doing that for the last few weeks anyway!

This weekend was very nice, and we celebrated in our own way.  On Saturday Bret was kept busy with various farm and new-home chores, so he was gone most of the day.  I managed to work on some hand painted wooden buttons to put in the Etsy shop, and made a banner for New Year's Eve.  We enjoyed a nice steak dinner with our own grass-fed beef, roasted potatoes with garlic, rosemary and sea salt, and Brussels sprouts.  We had ice cream for dessert and watched the second half of The Two Towers (Extended version).  We went to bed at around 10, since we had to go to Mass the next morning.  Truth be told, I am not very big on staying up until midnight, since I tend to awaken at 4:30 with or without an alarm clock.

Mass was lovely--we chose Gallatin for the Mass since I needed to get home in a hurry to cook a turkey.  It had to be cooked, as it had been given to us just before Christmas.  I was a bit nervous about it, but no one contracted food poisoning last night, so I guess it was okay!  Bread stuffing, sweet potato casserole, green beans and rolls rounded out the meal...everyone was full enough that a little chocolate served as dessert.

This week I need to get moving on the school planning (so much less fun than playing Wildcraft! with the kids), re-do our chore chart, as things have changed a bit with Bret being back at work, try to put a 4 week menu plan in place (haven't I been planning to do that since the beginning of the school year?) and look for the best prices on what I need to make a special friend for Adrian's birthday next month.

I am working on Adrian's sweater, which may end up as a birthday gift, although I am hoping to be done sooner.  I am itching to do another small and satisfying knit, like a hat or cowl or something.

The older kids are out filming in the cold, blustery, January sunshine, Dominic is in the schoolroom by himself, pretending something or other, and Adrian and Gemma are playing together with a pile of stuffed animals.  I've been writing this bit-by-bit for the better part of the morning, and it is time to be done with it!

I hope you are having a lovely Christmastide, and I wish you a good week!