The "boughten" gifts this Christmas

Well, yesterday I used my Yarn Along post to show the knitted gifts and books given this Christmas.  We did buy some of the gifts, of course, and I really try to consider carefully what each child will enjoy, since first of all the younger kids change their minds about what they want every twelve hours or so, and secondly because they get only a couple of individual gifts per child.

Una got lucky and received an unexpected cd player.  My uncle sent it for us, since ours has been kaput for over a year and I really missed listening to my music, not to mention instructional cds and audio books.  We are looking at getting one with a cd changer and hooking it up to our very good speakers when our tax return comes in, so I passed this one along to Una, on condition that I may use it when I wish, until we get one for the living room. This girl, who has been saying for years, "Oh, I don't need my own cd player," has been enjoying music immensely lately...I can hear her with her brothers dancing and laughing to the raucous strains of The Gypsy Kings or some modern Irish bands.

She also got some earrings from her favorite online shop, Shealynn's Fairy Shoppe, and my set of Prismacolor pencils, since she uses them more than I do. 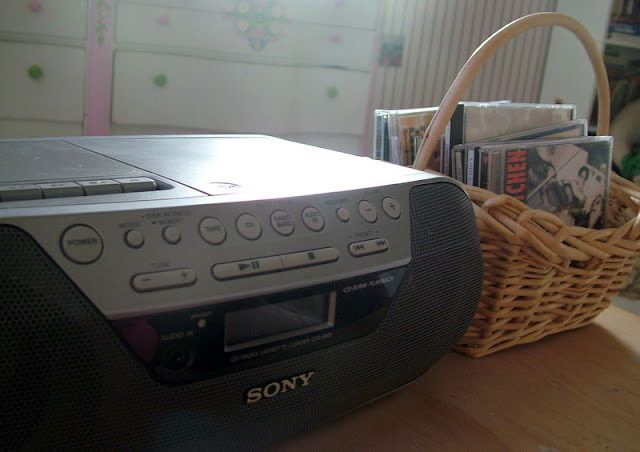 Sebastian had no idea what it was he wanted for Christmas, so I assured him that I would find something he would really enjoy.  I searched and searched online...and found this great science kit.  He has been having such a blast with it, and his siblings love watching him do the experiments. 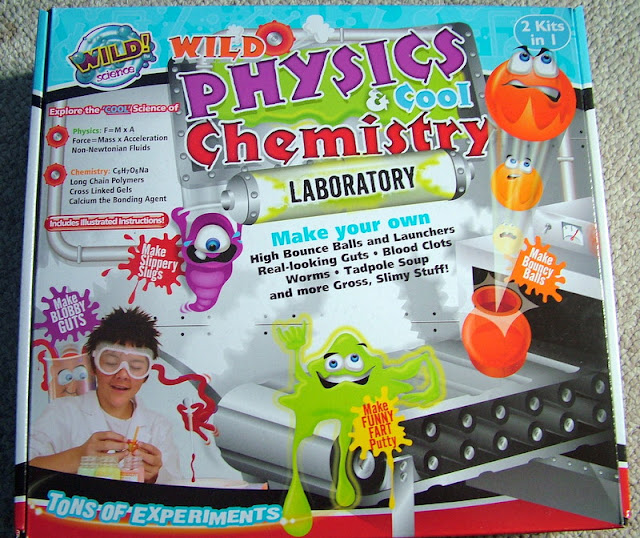 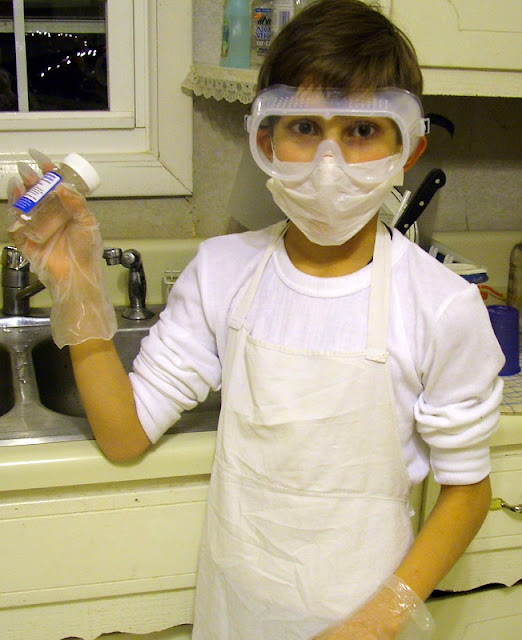 Gabriel, who is all about space ships and robots and such, received these two gifts, a kit for making a robot from a soda can, and a neat stencil kit for designing robots.  We haven't been able to get started on the tin can robot, since soda cans are hard to come by in our home!  We might have to go picking along the road to find one. 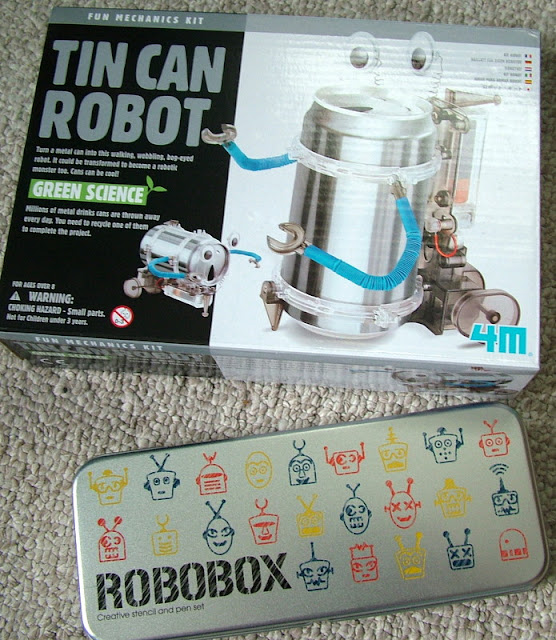 Adrian was thrilled to get the bongo drums he requested.  He really wanted a violin, but that was beyond our budget, and frankly pretty useless without lessons to go with it.  So bongos it is, and he is happy as can be.  And he got a head-flashlight, since Bret got tired of his being borrowed. 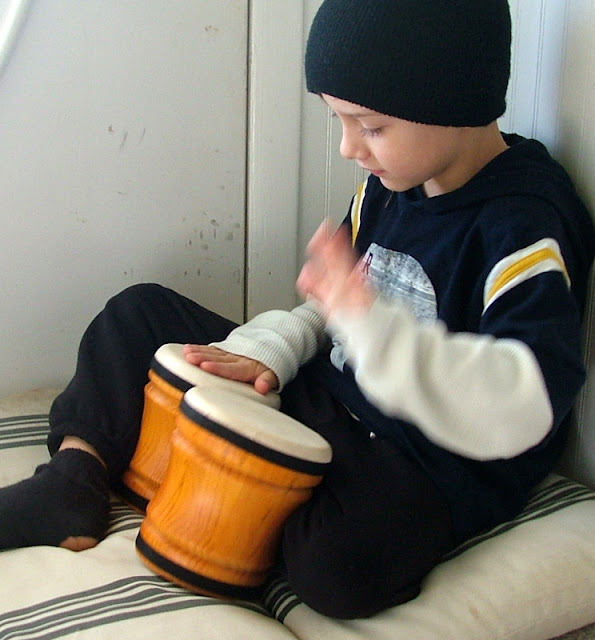 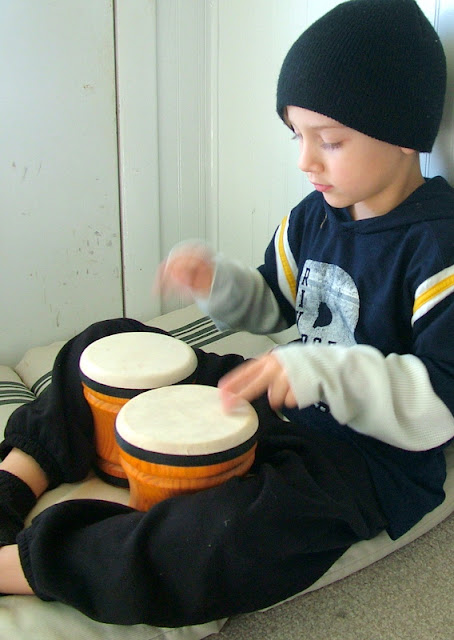 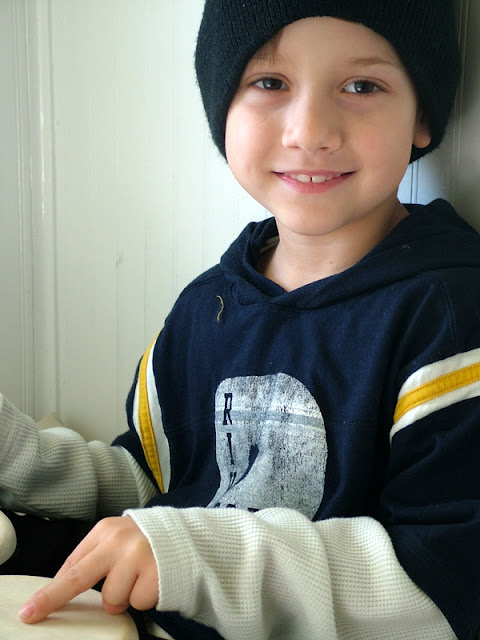 Simple instruments are best for us, who have no means for lessons.  Una, Sebastian and I have taken up the penny whistle.  Dominic was always asking to use one, but of course all he accomplished was screeching  and shrieking, jarring everyone's nerves.  I thought a harmonica a good choice for him, and I was right.  He just goofs around with it, but manages to sound like he's playing something most of the time.  What's more, when he is playing, he is usually fairly still and not chattering--added bonus. 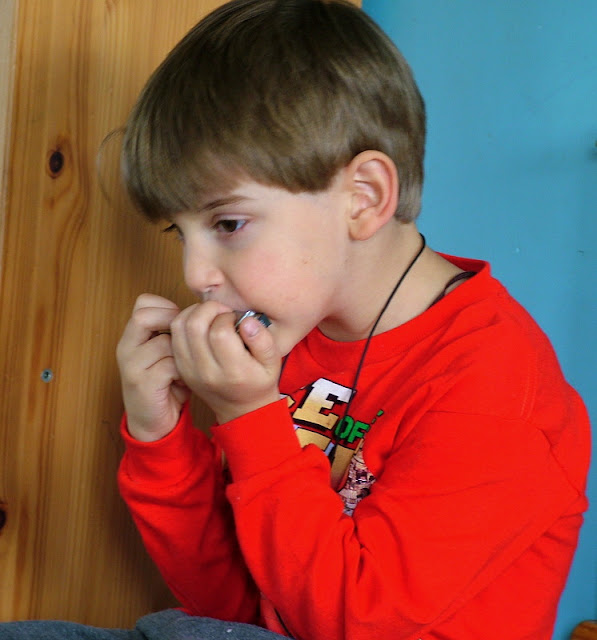 He also got a pair of inexpensive kids' binoculars.  They work pretty well and are covered in rubber, making them more or less impervious to the unintentional destructiveness of five year olds. 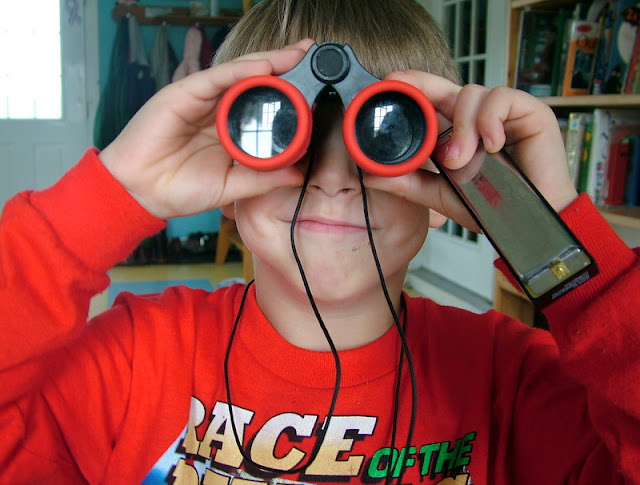 I always get several gifts that are for all the children together.  Usually my mom gives us money to purchase something for the kids, and I use it for board games and maybe a few choice dvds.  Two years ago I purchased Orchard, which is a cooperative game, and it was one of the best game purchases I ever made.  I try to buy these sorts of games because in my lot of competitive kids, I have a few really sore losers.  They argue so much in a day, that I like having them play a game where they have to work together to achieve an end.  This year I purchased Wildcraft!, which I must say is absolutely fantastic (very detailed information about the game can be seen with the link).  It has the added bonus of teaching the kids all about wild plants that can be used for food or medicine.  The one drawback?  It goes on a bit too long for younger kids.  I think our game lasted nearly an hour and a half, played during Gemma's nap time.  It was almost too much for Dominic, who played as a partner with me (the game is only for 2 to 4 players). 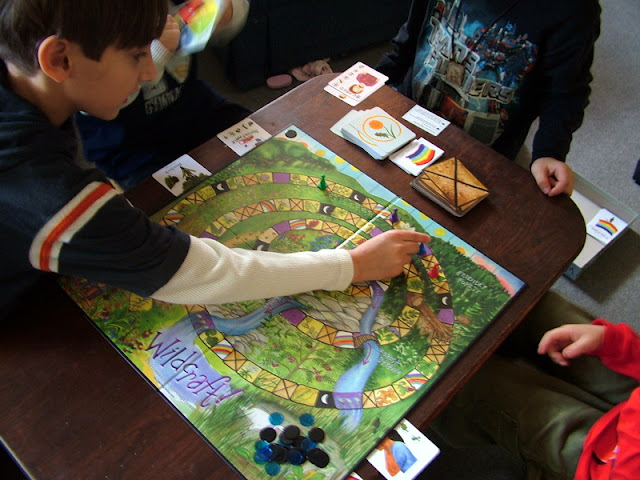 Another really great thing I purchased was this set of wonderful fantasy/fairy tale story cubes.  I got them from The Fig and Thimble, which is the family Etsy store of Kimberlee, of Pondered In Her Heart.  Her son, the multi-talented Josiah, hand-drew the pictures on these wonderful cubes. If you would be so kind, please say a prayer for Josiah as you read this--he is stricken with a bad case of pneumonia right now and is very ill. 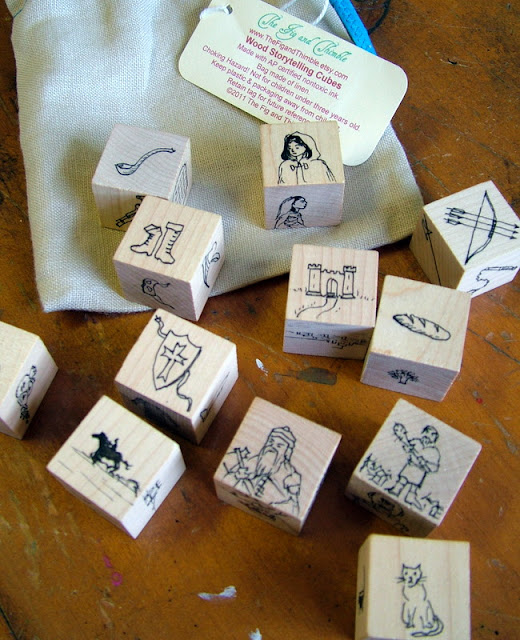 The two dvds I purchased were the extended versions of The Fellowship of the Ring and The Two Towers. Una had requested The Return of the King for her birthday back in April, so now we have the full Lord of the Rings set...and it is wonderful!

And that wraps it up!  I'll be back tomorrow with gifts we made...