A cyclops mask for Sebastian

My kids love to stage little theatricals.  They are kept very basic, as even the youngest are involved in them (guided by very loudly-whispered cues and directions!).  Unfortunately, there are those who seek to pull off a professional production and sometimes tempers flare and feelings are hurt.  As much as I love watching these performances, I do dread the rehearsals, as the actors spend a great deal of time shouting, sulking, whining and quitting dozens of times.

Although I am rarely called upon for anything other than locating possible props and acting as a sounding board for disgruntled thespians, I do occasionally help out with a thing or two, usually in the costuming or make-up department (being called in to paint on a mustache or such).  This time Sebastian informed me he required a cyclops mask for the play they are working on.  In the past, the kids have made do with simple masks of cardboard or paper bags with eye-holes cut in them.  But I had this stuff in my craft cabinet: 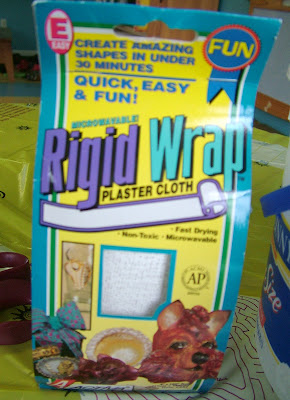 and I was really itching to work with it.  I couldn't convince Sebastian to let me use his face for a mold, and in the end I am glad I didn't, as he is a fidgetty boy and I am sure it would have been quite an unpleasant ordeal for him to lie still for 30 minutes with cold plaster on his face.

So I used a mask I had bought and painted nearly 30 years ago as my mold.  I just covered it with plastic wrap first. 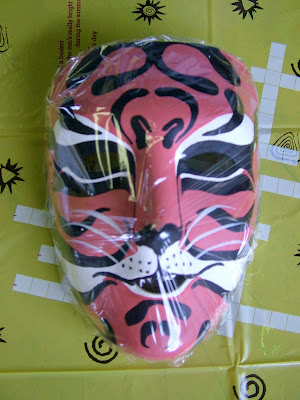 From there, I just followed the directions, first creating an X over the bridge of the nose to give the mask some structural strength, then beginning to build up some layers over the rest of the mask.  It really takes only three to five layers to create a strong mask. 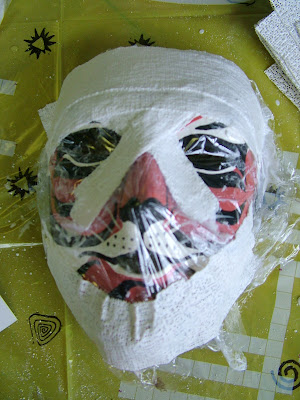 Since I was making a cyclops, I covered the eye holes, intending to put small, unobtrusive holes in with a drill afterward.  I just made it thus: 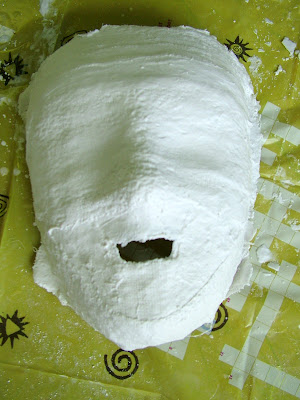 After the basic mask was made, the fun began.  I built up the area in the eye sockets a bit, sculpted a false eye from thin strips and built up the nose and lips.  I also built up the brow bone above the eye a bit.  And I added a wart to the nose, at Sebastian's request. 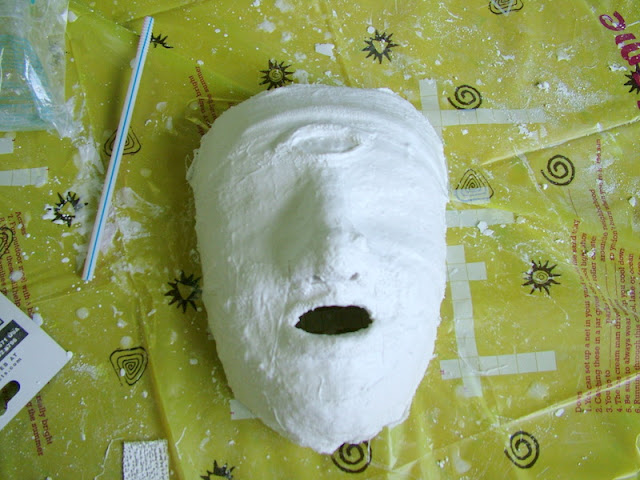 It felt really heavy at this point, but after drying for two days, it was quite light.  I drilled the holes for the eyes and trimmed some flimsy bits from around the edges.  I wish I had had a spray primer to coat it with before painting, but I didn't, so I just used a few coats of white acrylic.

Of course, painting is the real fun--watching it come to look like something. I gave it a coat of clear acrylic spray and hot-glued on a strip of fake fur for the eyebrow.  It awaits only holes on the sides by which to attach some elastic, although I am trying to think of some other way--I don't want to create weak spots by drilling holes. 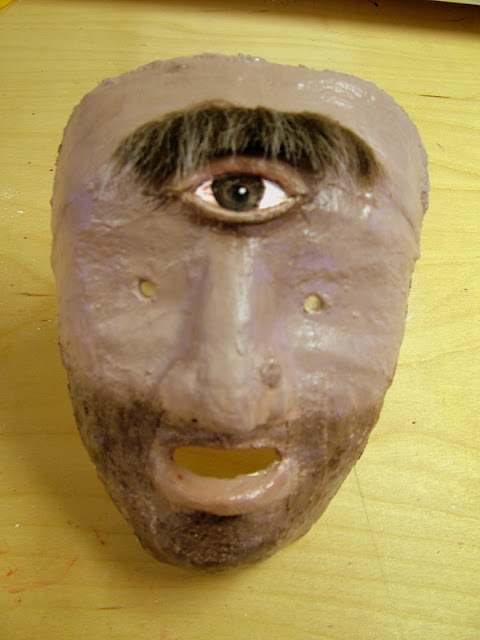 Sebastian thinks this play is going to be really good (they all are, you know!)
Posted by Nadja