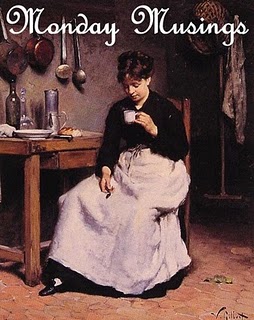 Right now...it is 6:18 and dawn is just revealing herself, lying on the eastern horizon.  The house is quiet, Gemma having awakened and gone back to sleep, and Una is out and about doing her morning chores, which she so loves to do in the milder months.

This weekend...was terrible and wonderful.  On Friday, Dominic had to go for pre-op blood work, and I knew that telling him ahead of time would be a bad idea.  So as we approached the lab, Bret staying outside with the other kids, I told him why we were there.  He got nervous, and I explained that I hadn't told him because I didn't want it to spoil his day, thinking and worrying about it.  As it was, he sat on my lap and was very, very brave--unusually so, as this is the one who shrieks in agony when he bumps his head.  So, the fact that he was able to watch the needle go into his arm and only gasp was fantastic and merited a trip to Goodwill for a "bravery prize".  He got a Nerf Gun, so now he may run about with his three older brothers who all have Nerf Guns.

Saturday was dreadful, at least for me.  I awoke at 3:45 with the most dreadful intestinal distress.  Diarrhea for the next hour.  I took something for it at 5:15 and went back to sleep for another hour.  All morning I was in and out of bed with what felt like transition during labor.  When all of that finally passed, I was so weak that I would get up to do something, and then sit down within two minutes, too wiped out to move.  Sebastian and Bret went out to my mom's to repair a fence, and when they got back around dinner time, Sebastian looked colorless (not the way he usually looks after a day in the fresh air and fine weather!).  He felt queasy and tired, and went to bed early with a heating pad on his tummy and a bucket by the bed.

Yesterday we were all well!  We decided to go to the Latin Mass in Horse Cave so as to have a relaxing morning of it and not have to rush.  I made up a quick lunch to take along (the Mass is at noon, and an hour from home, so we are all ravenous when it is done), and we packed the kids' play clothes for afterward.  The ride to Mass was just beautiful, and the Mass itself lovely beyond words.  We ate our lunch in the Parish Center, the kids went out to play and I went back into the church for the Holy Hour.  I never get a chance to spend an hour before the Lord in quiet, so it was really special.

At home I worked on my knitting and we all watched The Lilies of the Field, which we seem to watch at least once a year.  I love so much about it.  Sidney Poitier, the fact that it was filmed the year of my birth, it was filmed near Tucson where I lived for 9 years, and the German nuns, who are endearing to me, as I grew up in Munich.  Bret even attended Masses with a "mobile priest" like the one in the film, when he lived in Arizona as a boy and stayed with his uncle and aunt in Lukeville.  It was a really lovely Sunday and more than made up for Saturday's unpleasantness.

Some plans for this week...still need to find time to get a plan for the rest of the school year together.  We are working, but I want to stop blowing off the "good stuff", like history, science and art!  And for that I need a plan.  I finally broke down and bought the IEW writing course for Una, and to teach myself how to properly teach writing (funny how one can know how to do something without knowing how to teach it).  It was costly, and we are on a tight budget, but I think it will be well worth it in the long run.  So, I have about 8 more hours of seminar dvds to watch.  I also need to get going on the spring cleaning/change of wardrobe thing.  Ugh.  I just want to go out in the sunshine and play!

If I get some time for myself, I want to...try casting on a pair of little socks for Gemma, as sock-knitting was one of my resolutions for this year.  I am hoping to get a sweater and a pair of socks done for all the kids by the beginning of December.

Special prayer intentions for this week:  we are continuing with our perpetual novena to St. Joseph for ourselves and for our friends who are trying to sell their farm.  We are praying for jobs for Bret, heavenly assistance with our house-building project and for all our temporal and spiritual needs, especially during this Lent.  I also pray that all will go well with Dominic's ear tube/adenoid surgery on the 31st of this month.

Something that makes me smile:  the greening of Patch O' Dirt Farm!

It took me all day to get this post done between umpteen loads of laundry washed, hung and taken in and folded, meals, school, cleaning and all...!
Posted by Nadja