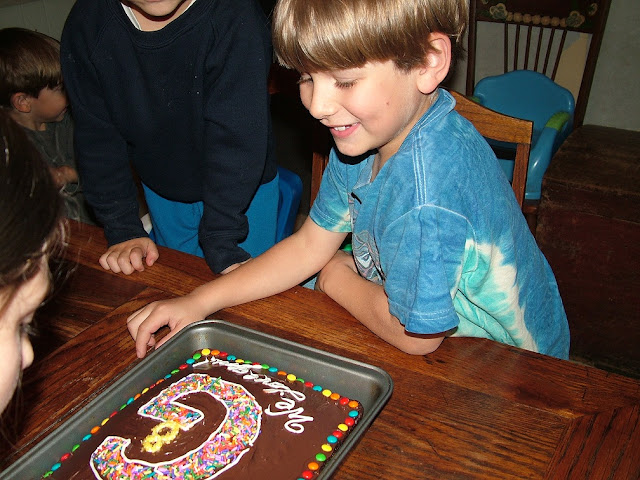 A bit of a lame cake this year.  I did better here and here.
Our second son turned eight today.  Gabriel Elias, our first Tennessean, the first of four children born in this house.  We were so focused on selling our house in Charlotte, NC when I was pregnant with him, so busy with trying to keep the house tidy at all times for walk-throughs and with packing and planning, well, I can't even remember a thing about my pregnancy with him.

But I can't forget his birth.  Rachmaninoff's Vespers on the CD player, a blessed candle lit, Una and Sebastian sleeping...and the midwife two hours away on her way to another birth (which she also missed, coincidentally).  Bret likes to say that he delivered Gabriel; I like to say that the Blessed Mother came as midwife, seeing as mine couldn't make it.  Gabriel was out on the third push, easy as you please.

Some facts about my boy, Gabriel:  he is named for St. Gabriel Possenti, a Passionist (February 27).  He spoke using mostly his own language as a toddler.  "Wah" meant big, for instance, and "Dee" meant little.  A "Mak-mak" was a tractor.  When he first began to put a pencil to paper, he would doodle little things on it as toddlers do, but he would doodle in every little space on the paper until the paper was completely filled.  He still draws that way.  He is my laid-back kid and the most affectionate one, always hugging people, and giving me a kiss every morning and every night.  He is also the one most easily overlooked, being so undemanding.

We once lost him at Wal-Mart.  The longest seven minutes I have ever known.  Or maybe not.  He used to nap on his own whenever he got tired, and I once searched for him and couldn't find him.  My brother-in-law came over to help me look for him and I thought I would stop breathing, I was so panicked. It would be getting dark soon, and I couldn't bear the thought of him being lost in the dark.  A second search of the house revealed that he had put himself to bed and was beneath his covers.

He loves Legos and Bakugan, robots and spaceships.  He dreams big dreams of "Gabriel Industries", where he will invent all sorts of wonderful things.  Happy birthday, my darling boy.  Dream big, and never stop.  I hope to see some of those wonderful dreams come true one day...just not too soon, okay?  Stay my sweet boy for a while longer, will you?

Yes, I did mention another birthday, didn't I?  My Goddaughter was born this evening!  This is our second Godchild born in November, and the other, my Godson, John Anthony, was born on my birthday.  Sure makes it easy to remember their birthdays this way!
Posted by Nadja