Touching a still-wet calf in the cold pasture in the middle of the night with only the other animals as witnesses is something akin to a sacred moment.

I was dealing with  Gemma in the middle of the night because the bonny lass didn't want to sleep.  She was squirming and complaining even after I'd nursed her, given her homeopathic chamomile, changed her wet diaper and finally gave her a dose of Tylenol.  I was putting her down in my bed for the umpteenth time, hoping she would just sleep already when I heard some soft lowing in the pasture behind our bedroom.  I told Bret that perhaps Naomi was having her calf.

"She's a cow, she'll be fine," he said.  Whereupon I left Gemma in his care and dressed, put on boots and jacket, located the flashlight and camera (just in case) and went out into the dark and muddy pasture.

And there was Naomi, disposing of the placenta as animals do.  And nearby, a little lump on the ground.  I took out the camera, aimed in the darkness and shot.

I came back in at 12:45 and Bret was sitting in the living room with Gemma.  I took her and Bret got dressed, put fresh hay down in the barn and then carried the calf to the barn.  Gemma finally got to sleep at about 1:15, and the Bret and I at 2.  The calf--a bull, I think--is doing fine.  Naomi is a first-time mommy, and hence a nervous wreck, but she's alright, too. 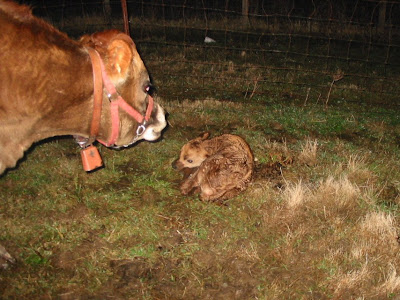