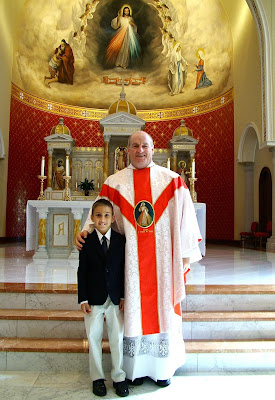 Sebastian made his First Holy Communion yesterday on the Feast of St. Peter of Alcantara by the old calender and the Feast of St. Isaac Jogues and the North American Martyrs on the new calender. And yesterday was the beatification of Louis and Zelie Martin, St. Therese of Lisieux's parents (I found an online press kit for the beatification here). You can click on the above photo for a larger version, and then you can see how the cross above the tabernacle is blocking the words "I Trust" beneath the Divine Mercy image, leaving the words, "Jesus...In You", which is the essence of Holy Communion, isn't it?

His was the first First Holy Communion to be received in the new Chapel of Divine Mercy in South Union, KY. It was wonderful for me to have him receiving our Lord kneeling beside me at the communion rail for the first time.

Of course we had a party afterward, and the weather was sunny and pleasant. We were so glad that Fr. Tom Sullivan, CPM, who was the celebrant at the Mass, could join us for the party. He is a favorite with the children, and we weren't sure that he would be able to make it.

Sebastian received a nice amount of cash for his savings account from his grandmothers, a special photo album and enormous bar of chocolate from our special friends, and from his aunt and Godmother the gift he has been pining for: a guitar. Our gift will be his first lessons, but I also made him a rosary and will put a custom binding on a prayer book I purchased for him. Oh, and we also gave him this beautiful certificate from Trademark Catholic Stationery.

And here is a nice shot of the three oldest kids after Mass. There was no way we could get a family shot, as the two little guys were on the verge of melt-downs and it was all we could do to just get them into their car seats! 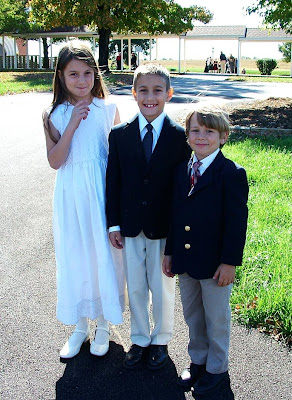 And this is my new favorite shot of Gabriel. I can edit out the scratch on his face, but there is not much I can do about the van door! Oh, well... 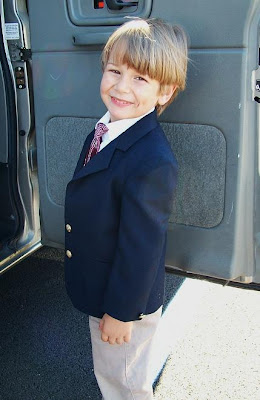