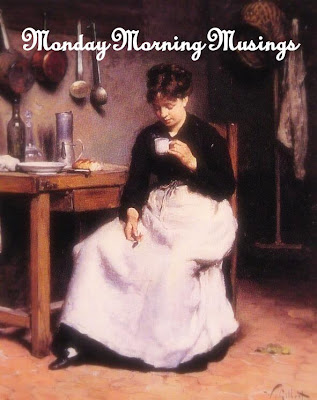 Right Now:  6:36 a.m., and I have just broken up the third argument in ten minutes between the little guys.  I can't remember the first, but the second was over Dominic "covering up rainbows" (those on the wall cast by the sun hitting the beveled glass in our furniture) and the last was because Dominic wouldn't let Adrian look at a book with him...everyone is up but for Gemma, who is no doubt wiped out from staying up until ten and then waking me for nursings twice, and Una, who woke me at four to tell me about her bad dream.

We have to keep sending Dominic out into the school room because he insists on blowing with all his might into a toy recorder and banging a tambourine.  It's just too early for that...

This Past Weekend:  was very nice.  Friday we skipped school to do some major cleaning.  Nothing like having a guest--especially a priest--to get one motivated to clean.  Dusting, windows, wiping down cabinets, etcetera.  On Friday afternoon Bret picked up a half bushel of some of the best peaches I've tasted in years.  I had high hopes of canning some or making some jam, but we are eating through them so quickly, I don't know that we will have anything left in a day or two!  I do think I want to make at least a couple of jars of jam, though.

On Saturday we left the house early in order to run errands.  We made a stop at a thrift shop, and I found a couple of things for Gemma; alas, nothing in her current size, but a few things to put aside for ages 2 and 3.  Then on to buy groceries.  At home I spend ages putting away the aforementioned groceries, Bret washed floors and I gave him a haircut, we bathed kids, and then we watched most of Mr. Holland's Opus and I perused my knitting books and Ravelry to find my next knitting project.  Still not sure.

Yesterday we went to Mass and left right after in order to get home before Father.  It was pretty relaxing.  With all the meat in our freezer now, I decided to cook up a London Broil and a pork tenderloin and slice them up for sandwiches on some decent bread.  We had strawberry shortcakes for dessert, along with a second dessert which Father brought:  ice cream and cones.  He sure knows how to make himself popular with the kids!  After giving us a blessing, he departed and we watched episodes of I Dream of Jeanie and the rest of Mr. Holland's Opus.

Some Plans for the Week:  I have to make more butter, which is not my favorite thing to do in warm weather.  It is always difficult to work it.  We still have three weeks of school, and I need to finish my curriculum list for the coming year, even if I don't order anything for another month or so.  It is such a headache, all the more so when one has a really tight budget.  I also hope to make a list of activities and craft ideas for summer vacation.  Even though it will be busy for me with lesson planning and menu planning and ordering books, I hope to spend some time having fun with the kids.

If I Can Find Time for Myself, I Want To: make at least a couple of jars of homemade peach jam, more for the kids to see it done than for any practical purpose.  And I want to finish the dress for Gemma, make her a couple of pairs of summer pants, and finally figure out what to knit next.  So many patterns to choose from!  I also need to look at my computer file of handmade items I've gathered from the internet and start making a list of gifts to make.  If you are making Christmas gifts by hand, it is not too early to begin!

Special Prayer Intentions:  for the peaceful repose of the soul of my grandfather, Gene, who passed away last week, and for my grandmother, Frances, and all the family who will be missing him.  For a friend who is suffering from anxiety lately and with whom I can commiserate since I, too, have been suffering from anxiety lately, and for St. Joseph to throw some more work Bret's way.  Soon, please.

Something That Makes Me Smile:  Gemma being bathed by Una in the laundry sink.  I love this sink as a baby bath!  No more bending over a bathtub! 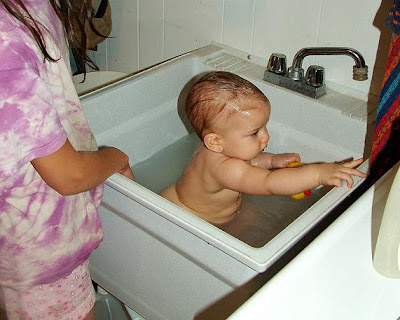 Hooray!  After weeks of procrastination, I have finally got a Mr. Linky widget!  Now both of you (you know who you are) can officially join me!  Anyone else is welcome, too.  Just grab the image header for yourself, post your own Monday Morning Musings (anytime on Monday is fine!) and link to your post below.  Have a great week!