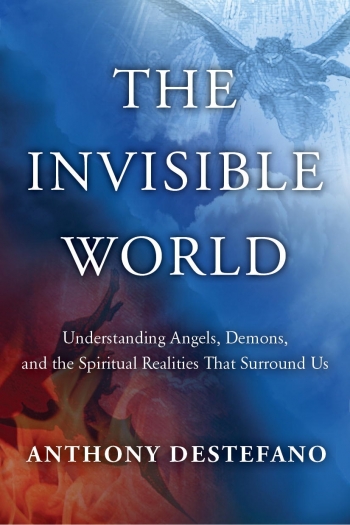 I was sent a copy of Anthony DeStefano's The Invisible World--Understanding Angels, Demons, and the Spiritual Realities That Surround Us for an honest review.  In this very readable book, the author attempts to make the reader more aware of the spiritual realm that exists all around us.  He begins with the premise that all people have an inborn "haunt detector" that is something like a channel into the spiritual realm.  Although I really dislike the term "haunt detector", I will acknowledge that most of us do have a "spiritual sensor" to some degree, more for some and less for others.

Without getting deeply theological and yet making use of sound theology, DeStefano takes the reader through the unseen realities beginning with our unseen God and then taking us, chapter by chapter, in an easy, conversational way, through the realm of angels and demons and the human soul.  After introducing us to each
of these, he describes the ongoing invisible battle for our souls and the unseen help we receive from God and His Angels.  He makes use of examples from his own past and also relies on the writings of St. Augustine and St. Thomas Aquinas to illustrate these realities.

I especially enjoyed the author's chapter on "The Invisible Power of Suffering" or redemptive suffering, a thing that is not readily understood by many.  DeStefano takes a fairly complex subject and makes it simple enough for those in the dark to get at least something of a grasp on it. He discusses, again using his own personal experience as an example, how our own sufferings can have an effect on not only those for whom we pray, but on future generations.  I found this enlightening, as I myself have often felt that it was only through the prayers and sufferings of some of my devout ancestors (priests and a nun among them) that my mother returned to her Catholic faith after 35 years away from the Church, and that my sister and I, raised without any religion at all, became Catholics individually, four years apart, in our adulthood.

Addressed next are what we call, The Four Last Things, namely: death, judgement, Heaven and Hell, in the chapter entitled, "Invisible Destiny".  Here I am unsure of how closely the author follows Catholic theology; I know a bit of what scripture and the saints have to say on the subject of what Heaven is like, and I do not really know how some of the author's assurances fit in.  He makes a few statements in the chapter that seem less than grounded in sound theology.

DeStefano draws to a closing in the final chapter, "Seeing the Invisible".  I was a bit worried as I read the title of the chapter that he might lead into some sort of New Age sort of obsession with phenomena, not entirely exclusive to the New Age movement, but found even among Catholics in the form of "apparition chasers" and the like.  But no, in this chapter he advises that we may all "see" these invisible realities more clearly if we use certain means at everyone's disposal, these being prayer, the reading of scripture, selfless works of mercy, and purity of heart, i.e., spiritual childhood or simplicity.  No doubt that when we put all these things into practice, we become more spiritual beings and begin to see how we are influenced by the invisible realms, as well as what effect we may have upon them.

I must say that in the beginning I was a somewhat put off by the author's highly conversational tone--more colloquialisms and exclamation points than what I am accustomed to in my spiritual reading.  But it works here, as he takes on the subject in a manner much like a speaker at a conference, or even a friend or co-worker across the table at dinner. His illustrations from his own life and experience work here.  Here you will not find an in-depth theological treatise, but those are not lacking for readers who seek them.  What is harder to find is an easy, readable  introduction to the topic, and the author has managed this nicely in his book.

The author kindly sent me a second copy to give away to one of my readers, so if you are interested, stop by here tomorrow as I join in Ginny's Yarn Along and give away a copy of the book!
Posted by Nadja