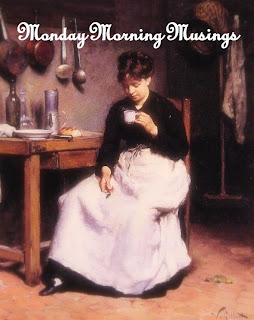 Right now...5:45, and the promise of a beautiful sunrise in the east.

This past weekend...was busy, but nice.  We had some rain early Saturday morning, and the temperatures, which had been in the 80's, cooled down to the 60's, but the sun was out and everything smelled wonderful.

Yesterday we drove out to Horse Cave, KY, for Mass.  We don't go too often, as it is so late in the day and the little church has no place to take a crying baby or cranky three year old, no place to change a diaper, so it isn't really an option for us unless the weather is good and we can take the offending child outside or to the van.  I love the Traditional Rite, and it felt good to be there.  It was the old Rite I fell in love with before I became a Catholic.  Boy, was I ever surprised by my first Novus Ordo Mass.  You see, I didn't know that there was any "new" Mass before I began going to RCIA.  I went home and wept for half an hour!

Some plans for this week:  I still haven't completed the clothing switch, but the sudden relapse of cool weather worked in my favor!  There is that to do, and our bi-monthly trip to the library.  Still trying to finish the menu plan, too, but I haven't had time to look up a few recipes, and I really want to replace a few of the old ones.

Una's birthday is Friday, so there is a wee bit of planning for that, as well as some gift-wrapping.  And we will be picking up the new chicks this week.  We only have to get some new heat lamps and chick starter.

If I can find some time for myself, I want to... finish the cardigan I am making.  I have the sleeves to do.  I think that it may turn out too small for Gemma (it may fit for a month or two before she outgrows it--if I can finish it soon enough!), but luckily I now have a little niece, so that wouldn't be too much of a problem.

Special prayer intentions: for Gabriel to be ready for his first confession in a couple of weeks, and for the help of Heaven in preparing him form his First Holy Communion, which we will probably celebrate in October, as his paternal grandmother will be able to make it out here, God willing, at that time.

I am also praying this morning for Adrian, sleeping well now, but he was up several times last night with some "mystery pain" that first was in his knee, then his arm, then his lower back.  It may have been dehydration, as he drank very little yesterday.  Anyway, it's the kind of thing that had me sleeping with him and praying a rosary and chaplet of Divine Mercy at 1:30 in the morning.  I hate those "mystery" things...!

Something that makes me smile: Sleeping babies with chubby cheeks. 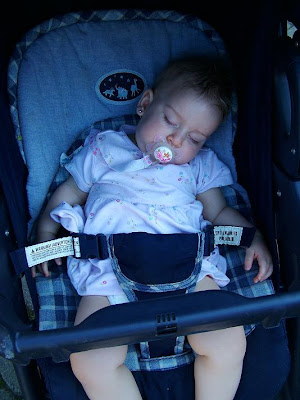 Hope you all have a really good week.  If anyone wants to do a Monday Morning Musings post, go ahead and copy the header, do your post and let me know of it in the comments so that I can read it!