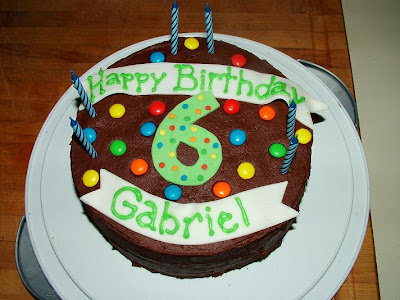 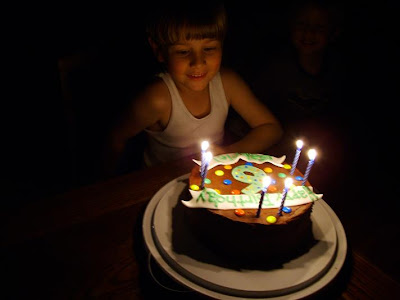 Gabriel Elias turned six yesterday, on the feast of St. Andrew. He received a special blessing from Fr. Shannon Collins, CPM, who baptized him on the feast of the Immaculate Conception six years ago.

He was our first baby born in Tennessee, and on the night he was born we had a blessed candle burning, a number of people praying and Rachmaninoff's Vespers playing. And my midwife was two hours away in eastern TN on her way to another laboring mom. She had high hopes of making it back in time for Gabe's birth, but Bret and I knew better. I have pretty quick labors. "She's going to miss the whole thing," Bret and I agreed.

She did miss it. In fact, she missed the other baby's birth as well. Gabe was out in three pushes and his papa caught him. It was about 1:30 in the morning on the 30th of November, 2002. Within a short time, he was surrounded by his Oma, his aunt and future uncle and his big brother (who was awakened by all the commotion). And the midwife and her assistant, eventually!

Gabriel was my "happy baby", and remains the phlegmatic of the family. He is the easy-going guy who goes along with his siblings' whims just to be agreeable. He is usually the first of them to rise in the morning, and the easiest to get to bed (even as a toddler he would take himself to bed when tired). He was the baby happy to be held by anyone, and the only one I ever lost at Wal-Mart for a terrifying seven minutes.

I love you, puddin' cheeks!
Posted by Nadja