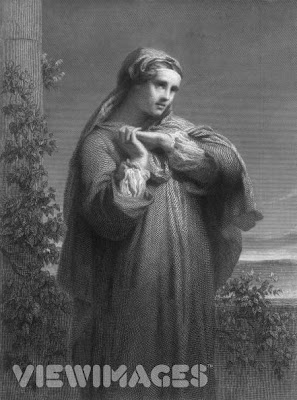 Monica, a saint especially revered by mothers because of her tireless prayers for the conversion of her wayward son, Augustine, was born of Christian parents in Tagaste, North Africa in 333, and died in Ostia, near Rome, in 387. She was married young to a government official, Patricius, who was not a Christian, and had a bad temper, though she bore her burdens patiently, and their life together was relatively peaceful. Three children were born to, Augustine, Navigius, and a daughter, Perpetua.

Augustine, the eldest son, though brilliant, was, according to his own account, a lazy and dissolute youth whose bad behavior caused his mother much grief ­ especially so after he went away to school at Madaura and to Carthage. Although Patricius became a Christian not long before he died, Augustine persisted in his pursuit of pleasure, and, as a nineteen-year-old student, joined the heretical Manichaean sect. When he began to spout heresies, Monica became alarmed, and intensified her efforts to bring him to Christ. In the Confessions, Augustine recounts Monica's dream which consoled and encouraged her:

"In her dream she saw herself standing on a sort of wooden rule, and saw a bright youth approaching her, joyous and smiling at her, while she was grieving and bowed down with sorrow. But when he inquired of her the cause of her sorrow and daily weeping (not to learn from her, but to teach her, as is customary in visions), and when she answered that it was my soul's doom she was lamenting, he bade her rest content and told her to look and see that where she was there I was also. And when she looked she saw me standing near her on the same rule." (Confessions, Book III, 9.14).

During this anguished period of prayer for her son, Monica consulted a bishop who had himself been a Manichaean before he became a Christian. He declined to intervene with Augustine, whom, the bishop correctly observed, was not open to hearing the truth. She persisted tearfully, but he refused to intervene. Nevertheless, the bishop consoled Monica that "the child of those tears shall never perish", which she took as a sign from God. Though he continued in his heresies for nine years, Monica followed Augustine to Rome and then to Milan.in an effort to rescue her son from his errors. In Milan she met Ambrose, who helped lead Augustine into the true faith.

A few months after his conversion, Augustine, Monica and Adeodatus, set out to return to Africa, but Monica died at Ostia, the ancient port city of Rome, and she was buried there. Augustine was so deeply moved by his mother's death that he was inspired to write his Confessions, "So be fulfilled what my mother desired of me--more richly in the prayers of so many gained for her through these confessions of mine than by my prayers alone" (Book IX.13.37)

An account of Monica's early life, her childhood, marriage, her final days and her death, is given in Confessions Book IX, 8-12. He expresses his gratitude for her life:

"I will not speak of her gifts, but of thy gift in her; for she neither made herself nor trained herself. Thou didst create her, and neither her father nor her mother knew what kind of being was to come forth from them. And it was the rod of thy Christ, the discipline of thy only Son, that trained her in thy fear, in the house of one of thy faithful ones who was a sound member of thy Church" (IX.8.7).

Centuries later, Monica's body was reburied in Rome, and eventually her relics were interred in a chapel left of the high altar of the Church of St. Augustine in Rome.

[From the website Women for Faith and Family]
Posted by Nadja