My Jersey milk cow is the best! 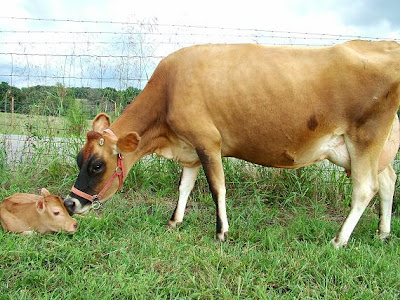 Yesterday while the two little boys were napping, I went out to look for the older kids who were nowhere in sight and had been out of earshot for way too long. I went around to the back of the barn, as I figured they were looking at the Beau, the new calf.

Well, the cow and calf were in the box stall, as were Sebastian and Una. Una was milking Nuala and Nuala was just standing there patiently, not even tied up, stall door open so that she could have just walked away. I asked Una what she was doing milking Nuala into a dirty bowl, and she said she was getting some milk for Jake, one of our two barn cats.

That cow is so sweet! She is even more patient with the kids than she is with us adults, making me wonder whether she actually senses that they are children.

We are rushing to finish up the last gallon of store-bought milk today. Bret milked out 1.5 gallons this morning. We will be sharing with the calf until he weans at about 3 months.
Posted by Nadja